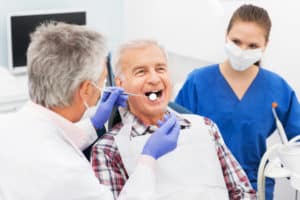 Doesn’t that sound like a term for something that had been left for dead out in the desert in an old Clint Eastwood Western? Or maybe a term from Olympic volleyball.

You may actually know that word by another term, cavity. Caries is the clinical dental term for decay in a tooth. Who knows why it sounds like a plural! Caries is the most common form of oral disease.

When you call them cavities, that’s not really accurate. When decay gets into a tooth, the decayed portion needs to be removed to stop the tooth degradation. A cavity is the result after your dentist removes the decay. That’s probably where the term originated. But the cavity/space now needs to be filled.

Filling. Ah, so that’s where that term comes from.

Dr. Roberts and Dr. Sirota remove dental caries and fill those teeth every day. More and more, we’re doing it with composite resin fillings. These are commonly known as tooth-colored fillings. Here’s why we’re using less and less of those old silver fillings you’ve known forever.

Mercury in your mouth

Most people think the silver fillings in their molars are, well, made of silver. Actually, they’re not silver; they consist of mostly mercury! More and more people now believe mercury belongs in a Newark industrial park, not their mouths! Silver fillings are made of silver amalgam. To make them, dentists mix mercury (50% of the eventual filling) with a powder comprised of silver, copper, tin, or zinc (usually a combination of some or all of those). There really isn’t any potential for harm from the mercury in your amalgam fillings. They’ve been studied by the FDA and they’ve been used since the 1800s. Still, some people don’t like the idea of being like a fish at the bottom of Lake Erie.

Of course, silver amalgam fillings aren’t exactly aesthetically pleasing. Open your mouth and everyone can usually see just how many fillings you have in your molars. Amalgam fillings have other drawbacks, as well. The edges of the filling can wear down, become weak, or break. This creates an environment where decay can take hold again. Also, with age the mercury, silver, and other metals in amalgam fillings expand and contract. This can make the filling split, or it can even crack a tooth. Plus, they can corrode, leak, and stain your adjacent teeth and your gums.

That’s why we’re placing more and more composite resin fillings at Prosthodontics of New York. The resin is a mixture of plastic and glass and it bonds to the teeth in layers, making them structurally strong. Plus they create a tight, superior fit to the tooth. And, unlike amalgam fillings, where a part of the healthy tooth needs to be removed to make room for the filling, Resin composite fillings can be placed into teeth that have lost much of their tooth structure.

The problem with resin fillings has always been durability. They just haven’t been as durable as silver amalgam. But that has been changing rapidly. Each year, technological improvements have been making composite resin stronger and more durable. It now is very close to the durability of amalgam.

Do you have sensitivity in a tooth? That could be a sign that decay has invaded. Call the team at Prosthodontics of New York, (212) 758-9690, to schedule an appointment.